The black and white images of the Ehoah Sigil and Ehoah Star are the root symbols representing Ehoah,
Complete Harmony within Nature, having no other associated meanings in these forms. 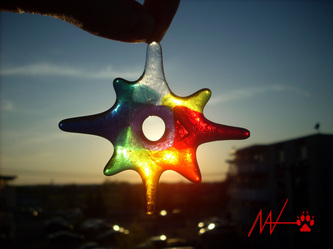 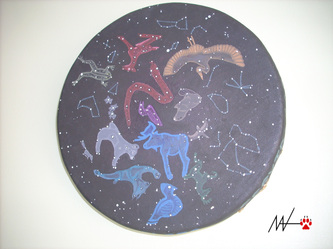 The circular image of the Ehoah Sigil represents
the basic shape that derives all other related symbolisms of harmony within Nature.
The Ehoah Star is a compass rose that represents finding our direction toward harmony within Nature, and as a star represents how everything we observe in the Universe is born from Stars, including ourselves.
Or in other words: "We are Star Born and Earth Formed."

As it is human habit to categorize and organize the world around you, the Novemmorium ("Nine Ways" Octagon Chart) was made to do just that. Making our surrounding environment easier to understand and conceptualize. Using the Novemmorium, rituals can be devised in respect to how Nature functions. Reminding us how interconnected we are in Nature and how we are very much a part of the big picture. The structure of the Novemmorium can be revised for your regional climate and needs.

Note that the following can be revised for regional differences i.e. bonding ceremonies at a moment so if a child is conceived it would be born at the most optimal time of year.

The life stages can easily be called "The Salmon Cycle" as they are born in the river, grow up in the ocean, return to the river, breed then die; Therein bringing nutrients to those about to begin the cycle again, making each cycle afterword more better off than the last. That is one reason why death and conception are together in the Novemmorium. The other reason is that moment of the year has the shortest day, and longest night. The "darkest moment" in life is death, but it is also the moment when the days begin to get longer. Conception is the point when life begins, even though it is only a little spark in the darkness - a little light that continues to grow and is born when the light is strong enough to become a flame. This makes Youth the moment when the fire is the brightest and Young Adult a moment when the flame is the strongest. Embers are Old Age, but those embers can bring about fresh fire by sharing their knowledge gained through experience.

Summary of Symbolism (Symb) and Actual Activities (Act) for life stages on the Kalendar:

Equilux: Birth & Infancy
Symb: Day and night is equal and going into longer days symbolizes the dawn of the year. Dawn itself being symbolic of new beginnings making it a moment to celebrate those experiencing new beginnings. Especially expecting mothers/parents and possible new arrivals.
Act: Providing nest building materials for Birds and small mammals having offspring. For humans, baby clothes and other family products are gifted to expecting parents to prepare homes for family life. People with new homes have house warming parties, and those who are renovating may receive care packages that assist in the project.

Translux: Children
Symb: The morning of the year, when the day is young and life is abundantly active. This is reminiscent of young life.
Act: Most every other animal who hasn't already given birth are doing so at this time. This would be the time when human infants would be born in the Kalendar for most regions of the world if procreation was commenced after Transequinox. It is encouraged to take quality time with children by together learning through discovery - of surroundings, the environment, the world, and beyond.

Lux: Puberty & Youth
Symb: The year's noon. The brightest part of the year with the longest days, evoking the energy and fervor of youth. This being the moment of most light in the year, themes on light and what we can see are abundant such as optical illusions and rainbows.
Act: In youth comes puberty, the mark of entering adolescence - becoming a young adult, making it a moment for discovering and celebrating self expression in whichever form it may take, especially gender expression. Youth are provided opportunity for self discovery and preparing for adulthood responsibilities. Trick of the light/optical illusions are presented to challenge young minds to question everything they see before accepting what ever is presented in front of them as reality. And therefore be better prepared to engage in the world, learning about the world, and not falling victim to those who would take advantage of ignorance. Because even if ignorant would be capable to engage in such a way to enlighten themselves without assistance or having to learn the hard way. Dressing up in a rainbow of colours is a fun expression for this time of year.

Transequinox: Young Adult
Symb: The year's evening, and the warmest part of the day and year, bearing the first fruits and maturing life. Represented as the evening it is considered to be a moment for togetherness, companionship and wooing; as well as celebrating the development of strengths and skills of young adults - those maturing in life.
Act: Competitions are held of various skill sets and strengths - involving creative, physical and mental challenges. Fledging youth "test their wings" by "leaving the nest" and striking out on their own; Courtships are had during the competitions; Young adults are encouraged to take these moments to bond with a significant other, and there are Bonding Ceremonies (weddings) for those who find themselves ready to announce their commitment to each other. Those prepared for starting a family actively procreate between Transequinox (Young Adult) and Equinox (Middle Age) in order to have child around Translux (Child) when the weather is more gentle on the young.

Equinox: Procreation & Middle Age
Symb: Half daylight, halfway through life. The Dusk of the year.
Act: Those prepared for starting a family actively procreate between Transequinox (Young Adult) and Equinox (Middle Age) in order to have child around Translux (Child) when the weather is more gentle on the young. Individuals of this age group celebrate achievements and hard-earned knowledge by passing what they've learned down to others. Sharing knowledge (tales of skill gaining, and learning through failure) especially for the Nox Mensis (dark months), engaging the younger in mind games so that they may gain wit, and providing a knowing hand in preparing for tough times. Apprenticeships can be started and those with the experience house and teach students.

Transnox: Old Age
Symb: The days are shorter with nights growing longer - the late night of the year and late years of life.
Act: This is a moment for acknowledging old age ('Getting mossy around the edges') and beyond.  The skeletal character Virid-os, its bones overgrown with vegetation and colonized by small creatures, uses dark humor to bring up uncomfortable topics such as death and decay. The character is somewhat apathetic, but takes pleasure in its potential to nourish other life, sometimes offering up parts for use. Transnox encourages discussion about typically uncomfortable topics;  to consider those who have come before us and what they have imparted on the next generation; and for really thinking about things that you may have not considered before - this is done to think and act on things you want to do before your death. Elders reminisce and youngers listen to learn what they can. Prepare for your own death with funeral plans and wills. Celebrations focus on the death phase in the circle of life by having the harvest feast themed on how the nourishment from them is sourced from what has died.

Nox: Death & Conception
Symb: This is the longest night of the year, and death is considered the "darkest time" in life. This is also when the days begin to get longer so new life is celebrated as well. The subject of death and conception connects to the subject of deep ancestry, the origins of life and the celestial bodies that life depends on.
Act: This is a solemn moment to remember those who came before us, whose bodies have provided the earth with nourishment. That nourishment providing a richer environment for new life. Those who have successfully conceived since Transequinox, now being past the first trimester when pregnancy is most at risk of miscarriage, announce the news and are celebrated along side those who have dispersed. The cycle of life and death renewed. The Cosmic History is retold and celebrated during these longest nights of the year when you can take a moment to look up at the night sky and appreciate what is before you.

Transequilux: Gestation
Symb: The days are getting longer, making it a moment to prepare for new beginnings of the up coming symbolic dawn of the year - Equilux.
Act: As the year is about cross into the 'day' part of the year, there are many themes on preparing for the new beginnings. Households begin to thoroughly clean out the old and unused to donate, reuse and salvage as well as downsizing in how much you own to what is truly used and needed. This is especially done for those that have conceived, preparing their home for the new member of the household. The arts are celebrated with art shows, performances, and craft fairs to fill in the still long nights, and is an opportunity for apprentices to show what they've learned in the past few months and sell some of their products. This is also a good time for crafting items for expecting parents.
© Rua Lupa